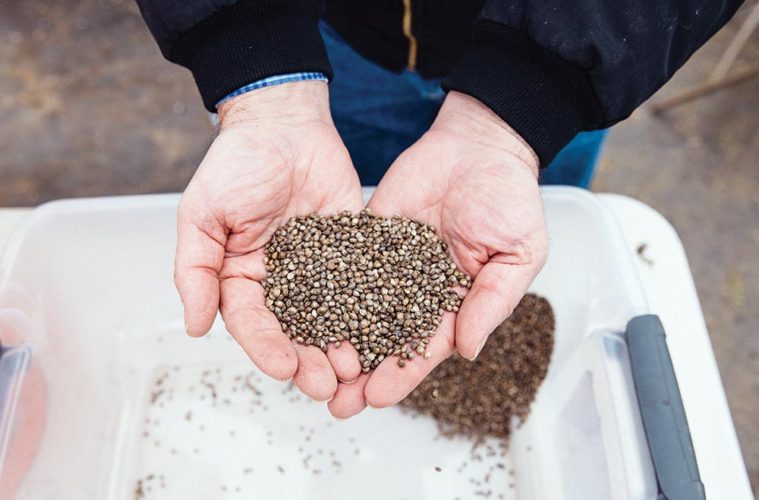 How to Source Viable Hemp Seeds

Whether sourcing domestically or internationally, U.S. hemp farmers have a myriad of options. But ensuring they don’t run afoul of the law and still receive quality, high-CBD seed requires a bit of knowhow.

This article was originally published in Issue 6 of HEMP. Subscribe HERE or find in a local grocery store.

With hemp newly legalized at the federal level, farmers across the country are eager to begin planting the crop. But acquiring seed can present questions to the new hemp farmer: How can one be sure to purchase high-quality seed only? What are the legal issues involved?

The quality of hemp seed can vary greatly, and inferior choices can be costly. For example, in Oregon, a group of growers is suing three seed dealers for selling defective seed that they say caused more than $21 million in damages. According to one plaintiff, what was sold as feminized seed for a high-CBD strain produced poor quality flower and pollen that ruined a nearby marijuana field.

One way to ensure that hemp seed is high quality is to purchase seed approved by a certifying agency, such as the Association of Seed Certifying Agencies (AOSCA), says Wendy Mosher, CEO of New West Genetics in Fort Collins, Colorado.

“Certified seed means a very specific thing to farmers,” says Mosher. “It’s not a broad, catch-all term at all. It means that it’s been approved by AOSCA, which is a large seed-certifying agency to which North America belongs.”

New West Genetics has developed the first hemp seed bred in the United States to be certified by AOSCA, a varietal known as NWG-ELITE. The Colorado Department of Agriculture created the country’s first hemp seed certification program in 2016. To qualify for certification under the program, hemp varieties must perform well in five diverse growing regions across the state. The varietals must also show that they’re not prone to THC levels above 0.3 percent.

The quality of hemp seed can vary greatly, and inferior choices can be costly.

Mosher says that New West Genetics set out in 2014 to breed varieties of hemp with enhanced cannabinoid profiles that could be cultivated on a large scale using traditional farming equipment. The company bred and grew millions of plants, selecting only about 0.5 percent of those each season that best exhibited the desired traits.

“It’s a highly selective process to get plants stable and to continue to do exactly what you want [them] to do,” Mosher says.

With the successful certification of NWG-ELITE in January 2018, New West Genetics made the seed available for purchase by farmers in states that have legalized hemp agriculture.

Chris Boucher is the CEO of Farmtiva, an agricultural company that farmed 55 acres of hemp in California’s Imperial Valley in 2018. He says that farmers should protect themselves by buying seed from a reputable breeder.

“It’s very important that you buy a stable seed … meaning that they’re hopefully not going to go to 0.3 percent [THC],” says Boucher.

Farmtiva is breeding hemp varieties high in CBD and will be marketing them to farmers participating in California’s newly legal pilot program.

Prior to the passage of the 2018 Farm Bill, Boucher says the regulations governing the purchase of hemp seed varied from state-to-state, meaning farmers had to be careful to be fully compliant with the rules for their jurisdiction. In West Virginia, a farmer was sued by federal prosecutors for purchasing seed in Kentucky and transporting it across state lines. On the application to grow hemp, the farmer had indicated that he would be importing seed from abroad.

Today, Boucher says that provisions in the 2018 Farm Bill take the legal ambiguity out of transporting hemp seed from state-to-state.

“It really gives the buyers and the sellers a legal interstate transportation avenue,” he says. “You don’t have to worry about it if you’re shipping seeds from a registered grower to another registered grower, as long as your paperwork is correct.”

That clarification can give growers valuable peace of mind.

“It alleviates all of the potential legal headaches — that the DEA could seize your seed, or say it’s marijuana, etc. So now there’s a whole paper trail that is in place that really secures the industry as a whole,” says Boucher.

Besides buying from domestic breeders, farmers can also acquire hemp seed from companies in Europe and Canada. Many foreign breeders have representatives in the U.S. that can help arrange a purchase for import. But those varieties are usually best adapted for the region in which they were developed, and the strains highest in CBD percentage have been bred domestically.

“Unfortunately, there are no CBD strains that are on the international imports list because CBD [strains] are an American invention,” says Boucher. “The Europeans are trying, and they are stealing our genetics left and right, but you have to get your high-end CBD seeds stateside and you don’t need a DEA permit for that.”

“The Europeans are trying, and they are stealing our genetics left and right, but you have to get your high-end CBD seeds stateside and you don’t need a DEA permit for that.”

In an email to HEMP before the 2018 Farm Bill, Dirk Fillpot, a communications coordinator at the U.S. Department of Agriculture, said that importing hemp seed is legal if strict requirements are met.

“Farmers are able to import industrial hemp seeds if they meet the conditions of the Federal Seed Act, including labeling requirements. They would need to also apply for an import permit and a phytosanitary certificate for the shipment,” Fillpot wrote.

Fillpot could not be reached for further clarification after the Farm Bill’s passage.

Customs and Border Protection advises on its website that imports of viable hemp seed will be permitted with the proper paperwork: “Non-sterilized hemp seeds remain a schedule I controlled substance and therefore may only be imported into the U.S. with a Drug Enforcement Agency (DEA), Application for Permit to Import Controlled Substances/Domestic and/or Scientific Purposes form.”

A healthy and profitable hemp field starts with quality genetics. Acquiring superior seed can be costly and requires attention to the details of regulation, but with due diligence in strain selection and compliance, it’s possible to make hemp a successful part of a farmer’s business.

LET US KNOW: How do you source hemp seeds?