Hemp farmers in western states face down the federal Bureau of Reclamation for the right to irrigate in time for growing season.

UPDATE 5/8/2018: After HEMP published this article in our Issue 3 print magazine in April, the government once again rejected Phillips’ application for water. On May 7, a lawyer filed a letter of demand on Phillips behalf. This letter, which Phillips shared with HEMP, clearly explains that she’s followed all the legal requirements of the 2014 Farm Bill and the state of Montana’s hemp growing laws. “I’m 100% legal under the program,” Phillips said.

In response to the letter, Dan DuBray at the Bureau of Reclamation told HEMP, “I can tell you that the request is under review and we’re fully expecting to address it by the end of the month.”

Eric Steenstra, president of Vote Hemp, said his organization will intercede in the situation if possible. “According to the Department of Agriculture, they talked to the DEA and the DEA said, ‘No, that’s not a problem, she can get water.'”

He seemed confused about why Phillips’ permit was denied. “I don’t know why the Bureau of Reclamation is still holding back the water.”

“TECHNICALLY, NO ONE’S EVER denied me the water,” says hemp farmer Kim Phillips, with a laugh.

Legally, Phillips can grow hemp on her 75-acre farm in Montana’s Helena Valley, but whether she can water her crops is another matter.

Phillips is at the center of a dispute that highlights the legal gray area around hemp farming in the United States. The water source she can access from her property is a federally regulated irrigation district controlled by the Bureau of Reclamation, a federal organization that manages water projects in America’s 17 westernmost states. Although Phillips has followed Montana’s strict hemp regulations, the Bureau of Reclamation didn’t respond to her request for water in time for her to irrigate the crops she planted last year. Her field languished and died.

While Phillips has been more vocal about her troubles than most, she’s not the only farmer at risk if federal policy isn’t changed. Among the states under the bureau’s jurisdiction is Colorado, the current leader in U.S. hemp-growing acreage, and farmers there are worried too.

When it comes to the federal government, change comes slowly. This year, there are signs that the bureau is reevaluating its policies and a bill is making its way through Congress that could further clarify the issue. Still, Phillips is concerned she may have to take legal action to irrigate this summer.

“If they don’t let me have water,” she says, “I am planning on filing an emergency injunction to allow me to have the water until it’s resolved.”

The Problem of Hemp Water Rights in the West

While the 2014 Farm Bill appeared to unambiguously legalize hemp grown under state research programs, not every federal agency seems to agree. The Drug Enforcement Administration, for example, continues to insist that CBD is illegal under the Controlled Substances Act, forcing CBD-oil producers to take them to court. Similar conflicts have occurred with the Food & Drug Administration, and other agencies seem to be caught in the middle.

Water rights in the American West already reflect a byzantine and specialized area of law. Essentially, any water that passes through reservoirs or irrigation ditches created through federal funds is governed by Bureau of Reclamation laws. When federal water mixes with state or locally controlled sources, it’s considered “comingled,” which can further complicate matters. 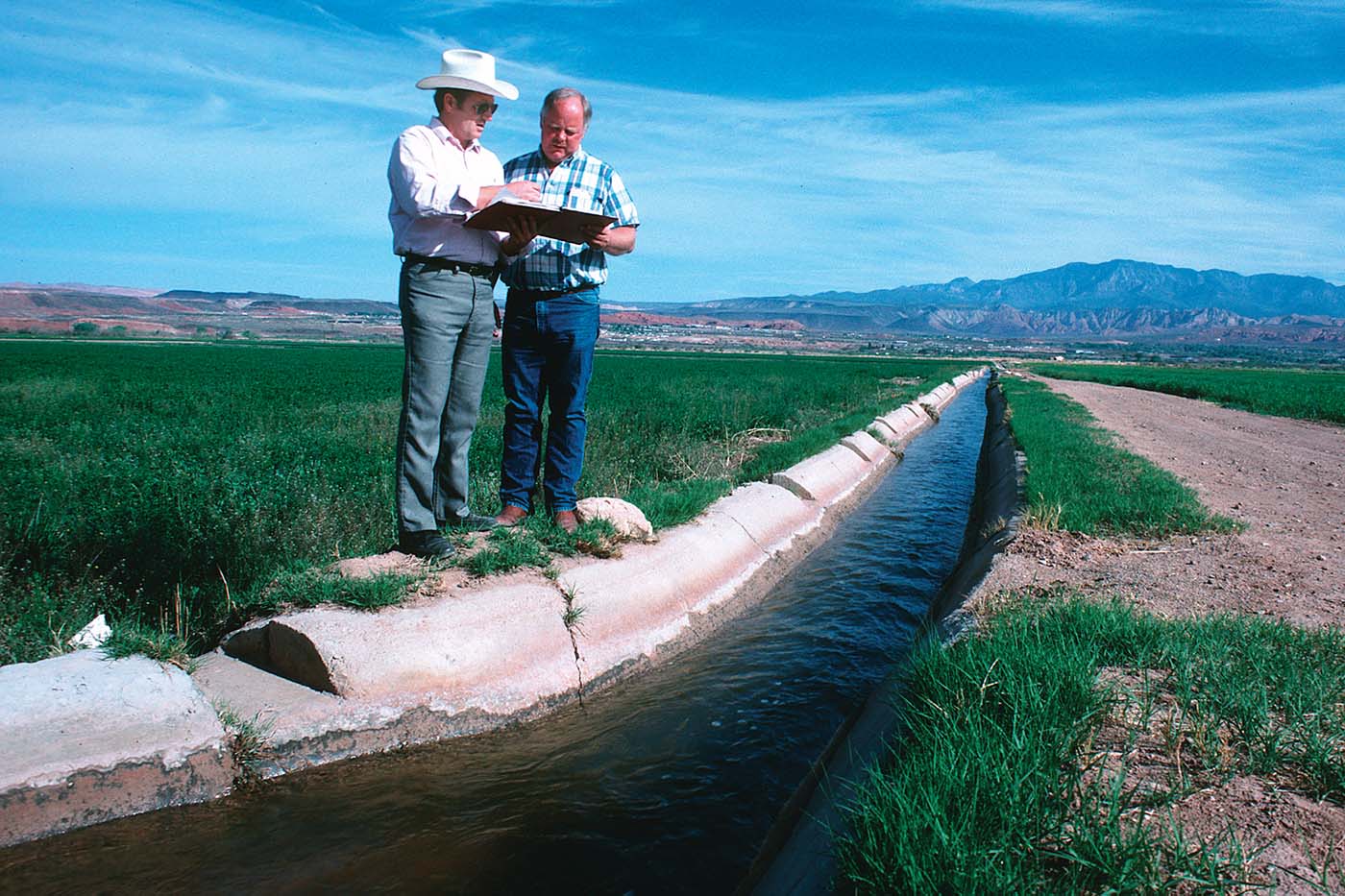 According to Dan DuBray, chief of public affairs at the commissioner’s office for the Bureau of Reclamation, the bureau’s policy toward industrial hemp was set during the early days of marijuana legalization in the 1990s.

“What happened a number of years ago was that water districts started reaching out to Reclamation as the legalization of marijuana started occurring in places across the West,” DuBray says.

The bureau’s policy doesn’t seem to distinguish between the high-inducing marijuana plant and industrial hemp, leaving farmers like Phillips relying on rainfall alone to keep her plants alive.

“As far as the use of federal facilities, the water produced exclusively through federal facilities is still covered under the Controlled Substances Act and that has been the issue that we’ve been trying to navigate,” DuBray says.

In a handful of rare cases, marijuana growers suspected of using federal water have even been referred to the Department of Justice, though DuBray said he wasn’t aware of any prosecutions resulting from this.

Eric Steenstra, president of the advocacy group Vote Hemp, first became aware of the water rights problem when Phillips reached out for help in 2017. The group attempted to intercede on her behalf.

Working with a supportive attorney, Vote Hemp sent a letter to the Bureau of Reclamation “informing them that they were ill advised and they had misinterpreted the law and there was no reason they should be blocking her access to the water because the hemp that she was growing is fully legal under federal law through the Farm Bill,” Steenstra says.

The agency never responded to his letter, something he chalks up to the inherent conservatism of government entities. “People hear ‘hemp’ and, unfortunately, often it gets misinterpreted,” he says.

Lobbyists have been working to change lawmakers’ perceptions towards hemp. Steenstra, Phillips and others reached out to members of Congress, who created the Industrial Hemp Water Rights Act to ensure that legal hemp growers have access to federal water resources. Authored by Sen. Michael Bennet, a Democratic senator from Colorado, the bill has six cosponsors from both parties, including Montana Republican Sen. Steve Daines and Montana Democrat Sen. Jon Tester.

“Private landowners should be able to use their water to grow industrial hemp, regardless of whether the water passed through federal water projects,” Daines said, in a joint statement issued by the bill’s sponsors, when the bill was introduced in July. “Washington, D.C. bureaucrats shouldn’t be able to restrict access to water for purposes that are allowed under state law.”

The Water Rights Act was later added as an amendment to the 2018 Senate Energy and Water Appropriations bill, and according to Bennet’s office, the senator continues to push for its passage.

Veronica Carpio, who runs Grow Hemp Colorado and helped lobby for the state bill’s passage, says rumors are swirling that federal officials “don’t want to allow water to be used this season for hemp in Colorado, so we’ll see how they prevent it.”

Phillips says she’s frustrated because she feels like she’s “jumped through every hoop” necessary to grow hemp in Montana, even using certified seeds that have been approved by the DEA. She hopes it won’t take a potentially costly lawsuit to allow her to irrigate her crop this year.

If she does take the government to court, she may have the upper hand, thanks to another act of Congress. After re-legalizing hemp growing in the 2014 Farm Bill, a 2016 amendment forbade the federal government from expending any resources to prosecute farmers operating under legal hemp programs.

Phillips says she’s frustrated because she feels like she’s “jumped through every hoop” necessary to grow hemp in Montana.

“All I can do is hope I can get some kind of injunction and then they’re not allowed to spend any money to fight me, and then I just have the water until the rest of the wheels in Congress get moving again and the laws change,” Phillips says.

It’s possible it won’t come to that. After initially sharing a federal policy document that seemed to equate marijuana and hemp, DuBray followed up, in a further conversation, with another document that acknowledged the changes made in the 2016 Farm Bill. He said that the current policy is “under review.”

“We’ll be working with growers on a case-by-case basis to try to harmonize our policy with the 2016 Farm Bill,” DuBray says.