What American Hemp Can Learn From Italy’s Thriving Industry

A photo essay from Italian photographer Matteo Bastianelli, who traveled his home country to learn about “oro verde” — or green gold.

About 25 years ago, Rachele Invernizzi moved to southern Italy on a mission to revitalize an economy and support struggling Italian farmers. Today, the Northern Italy-born entrepreneur is the president of the vertically integrated Italian hemp company SouthHemp, and her work has helped bring together over 250 farms in southern Italy. Her story sounds similar to one that leading American hemp farmers will tell about themselves in 25 years — if they are able to find the same success that Italians such as Invernizzi have earned.

“My company and I only work in southern Italy — and exclusively in southern Italy from Rome and down to the islands – because the soil conditions are better for hemp,” Invernizzi said, at the 2016 AgroGeneration conference in Italy. “But hemp can be grown all over the world, and we are doing studies that show it can be grown on marginal land — so that even on land where it is difficult to grow for agriculture, hemp is a solution.”

Rachele Invernizzi stands in front of hemp straw bales piled up at her facility, the first hemp processing center in Southern Italy.

Invernizzi’s facility is just a few kilometers from the city of Taranto, where pollution from the local steel industry left the land unusable for crops. Today, her facility produces hemp fibers for the bio-plastics company Kanesis of Sicily and the specialty paper company Canapa Cruda, and also produces animal litter, mulch and hemp shives.

SouthHemp uses such sustainable farming practices that the company and Invernizzi made international headlines in 2016 for the work they did to restore contaminated soil. 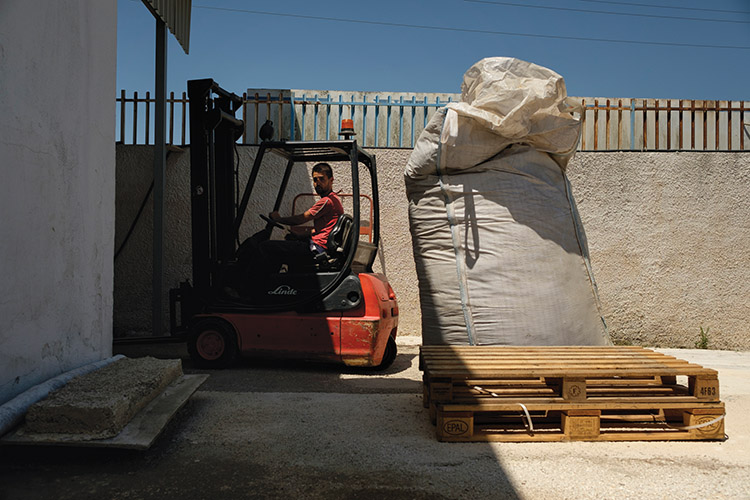 “Hemp growth is maximized in loose soils and fertile land, but it also adapts well in marginal areas if sown with the right technique and density,” Invernizzi said. “It is a plant that absolutely does not want chemicals and which is absolutely sustainable to grow.” 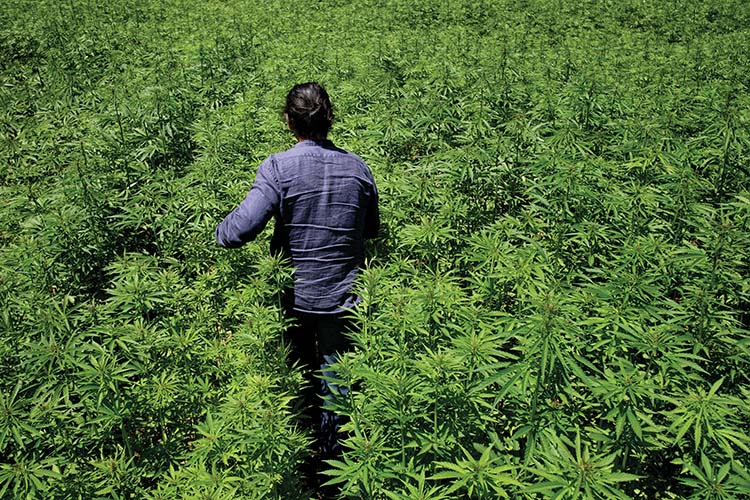 Eugenio Durante walks among his 4000 meter field of industrial hemp in Viterbo, Italy. Eugenio, along with this brother Leonardo, has been experimenting with the use of hemp for the realization of handmade fabrics, paper and building materials.

Hemp has a glorious past in Italy; at the beginning of the twentieth century, Italy was among the world’s leading producers and the largest industry in Europe, with almost 100 thousand hectares of its soil dedicated to hemp cultivation. But, in the ‘50s, the arrival of synthetic petroleum-based fibers on the market, coupled with the unrestrained consumerism of Italians looking to emulate the American dream, let to near oblivion for Italian hemp.

America’s War on Drugs also bled into Italy and industrial hemp began to disappear, despite hemp’s lack of psychotropic effects. International pressure and the interests of the emerging oil industry forced all countries in the world to follow suit, uprooting hemp from its place as a leading agro-industrial fabric.

Nevertheless, the outlook for hemp is now changing, albeit slowly, and once again, hemp is back to being a big opportunity for Italian agriculture — and an alternative to the rural flight for the young Italians who are often pressured to leave their land to look for a job in a city.

Vincenzo Fornaro, a farm owner in Carmine, Italy, is one of those young Italian farmers who felt pressured to leave his farm. Instead, he decided to cultivate hemp on a two-hectare field in an effort not to give up on his struggling land. Fornaro says that because hemp is a rotational crop which doesn’t require herbicides and increases a soil’s fertility, his hemp was able to absorb noxious substances and restore his soil. 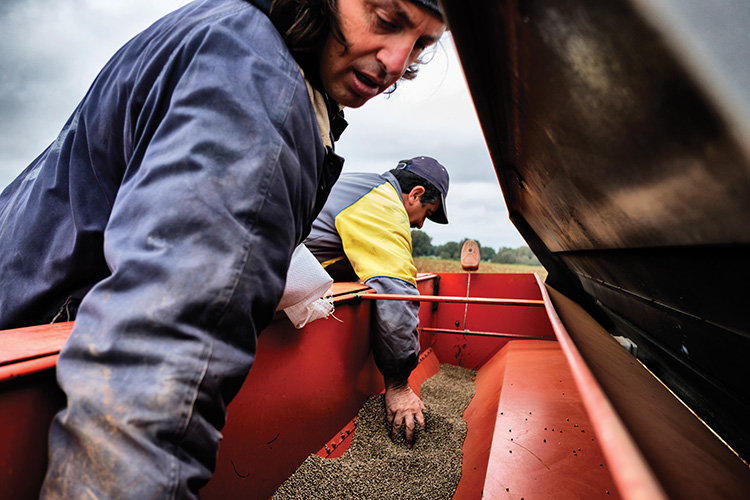 Others outside of the farm world are also seeing hemp as a reprieve in Italy’s struggling economy, and many are deciding to invest in the sector. For example, Italian contractor Emilio Sanapo converted his construction business into a company that now builds houses made of lime and hemp. 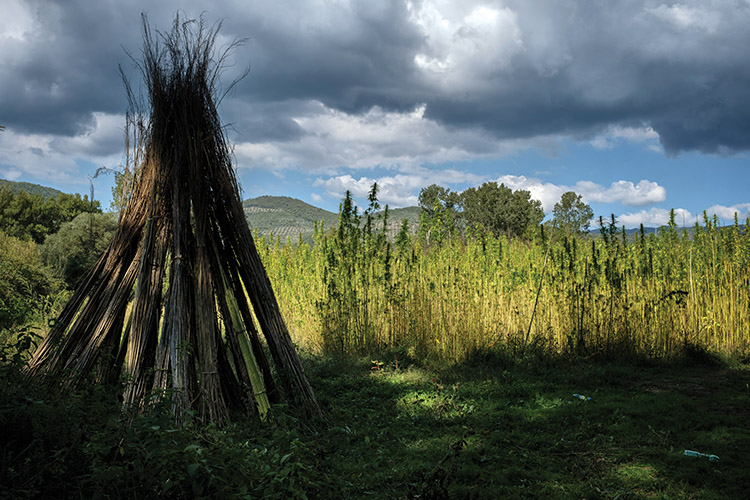 Some bundles of hemp, arranged according to ancient tradition, in the vicinity of a cultivated field for the “Saracinesco in Canapa” project.

The country has also passed increasingly progressive laws, such as removing regulations that required hemp farmers to report their crops to the police and increasing the legal THC limit up to 0.6 percent. Also, the Italian legislature passed a law in early 2017 that states hemp farmers will not be liable if they have THC percentages above 0.6 percent, but they can have their crop seized or destroyed. The Italian government is also providing financial support to the hemp industry.

In fact, with such supportive government oversight, Italian hemp leaders told reporters in early 2017 that their country’s hemp fields had grown by 200 percent in recent years.

“The boom in the cultivation of hemp is an excellent demonstration of the ability of farms to discover and experience new frontiers and meet the growing needs of new consumers,” Roberto Moncalvo, president of the agricultural organization Coldiretti, told Canapa Industriale (a newspaper focused on Italian hemp). “This shows how the green economy can open up employment opportunities in rural areas that can contribute to sustainable growth and economic recovery.” 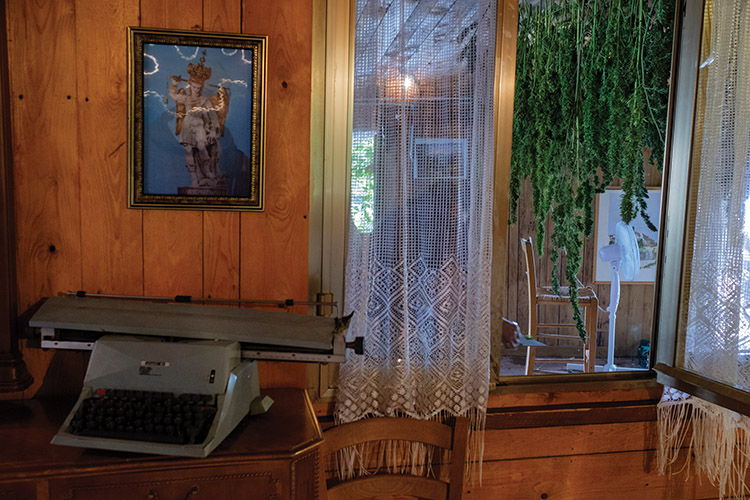 Industrial hemp inflorescences, low in THC, in the curing and drying room for the “Saracinesco in Canapa” project, which aims to reintroduce hemp to the small Saracinfsco commune in the hills outside Rome.

Elsewhere in Europe, hemp cultivation has resumed, including in England, Germany, Romania and Poland. All of these states have been investing in industrial hemp since the 1990s, which has given them a significant leg up on American competitors — many of whom are focusing on CBD because of America’s competitive advantage with cannabis cultivation.

In Italy, young Italian farmers follow a great tradition; it is no accident that they have been encouraged more by their grandparents than by their parents, who are still strongly influenced by the Prohibition era. In Italy, hemp farmers remember that the cornerstones of peasant farming were based on a simple, natural and environmentally friendly lifestyle — and this comes through in the quality of the hemp.