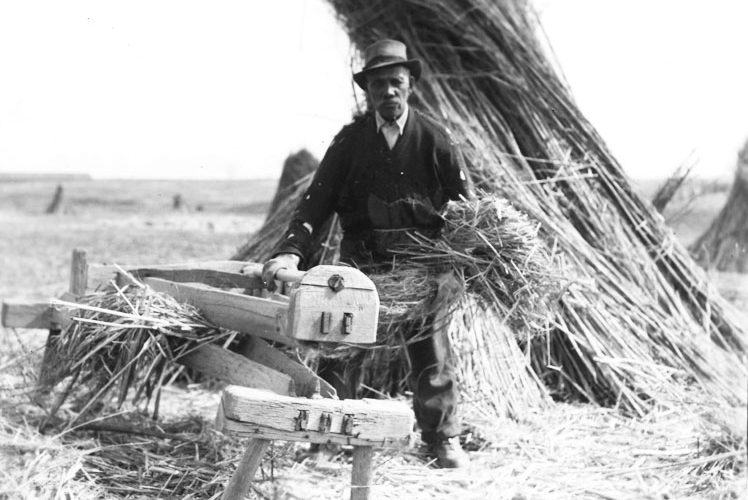 Slave labor brought this labor-intensive crop to prominence in centuries past. As the hemp industry begins anew, it should remember the shoulders it stands on.

Though hemp is generally accepted today as a harmless yet highly useful source of food, fiber, fuel and building materials, it’s still a crop that has carried a lot of economic, social and political significance throughout American history. Those who are currently working to build a healing hemp industry across the 50 states should remember: Without hemp farmers exploiting slaves for their labor, hemp might never have flourished in early America.

In 1619, it was illegal not to grow hemp in Virginia and soon, due to its resourcefulness, Massachusetts and Connecticut adopted similar laws. Meanwhile, Pennsylvania, New York, New Jersey, North & South Carolina and the New England states were heavily to encourage cultivate hemp through subsidies and bounties. However, the efforts to establish a hemp industry in new markets in Northern states weren’t that successful, as the cultivation power largely remained in the South where enslaved African Americans were forced to plant, grow, harvest and process hemp.

Even Thomas Jefferson, the third President of the United States, forced slaves to cultivate hemp on his plantation called Monticello in Virginia, where tobacco, cotton, flax and other mixed crops also grew. Though he is credited with writing the Declaration of Independence, Jefferson was also adamant about upholding the violence and indignity of slavery. He enslaved men, women and children on his 5,000 acre farm, where they reportedly grew massive amounts of hemp as early as 1774. His plantation has since turned into a tourist destination. It was during the late 1700s when Jefferson declared that “hemp is of first necessity to the wealth & protection of the country.” Above: A former slave uses a hand brake in Lexington, Kentucky. Many former slaves transitioned after abolition to sharecropping which continued the exploitation of black Americans. Photo: John Winston Coleman Jr.

Hemp was also a big commodity in Kentucky, supported again by slave labor. In his book “A History of the Hemp Industry in Kentucky,” historian James F. Hopkins asserts that hemp is the reason that slavery was able to flourish in the Bluegrass State. During the mid-19th century, Kentucky was the nation’s leading hemp-producing state, with peak production of 40,000 tons in 1850. The climate and soil in the region were considered ideal for producing the major crop, which required less attention than growing cotton. Enslaved workers were tasked with both the dirty and labor-intensive job of breaking the stalks and hackling hemp fiber in preparation for sale, as well as working in manufacturing establishments where they made hemp bales and rope by hand in long, narrow buildings called rope walks.

Though other states were not as profitable as Kentucky, the United States census had counted 8,327 hemp plantations of at least 2,000 by 1850 — yet the widespread success wouldn’t last much longer. Hemp production began to see a decline during the Civil War and the abolition of slavery, which continued to slowly reduce the amount of farms in the country. Ultimately, hemp farming was drastically reduced with the Marihuana Tax Act of 1937, when the federal government outlawed the production of cannabis, including hemp. Production began to pick back up around the time of World War II, but the crop was never grown as widespread as it had once been.

“Hemp… is abundantly productive and will grow for ever on the same spot, but the breaking and beating it, which has always been done by hand, is so slow, so laborious, and so much complained of by our laborers.” – Thomas Jefferson, 1815

Many parts of America’s dark, tragic history have been washed over with the revisionist glaze of that glosses over some of the ugliest, often most embarrassing facts of our country’s past. Whether the nostalgic haze comes in the hope of erasing the pain of unimaginable abuse or to redeem the more honorable parts of the country’s history, our gaze is often averted to the euphemisms of the time. Though hemp’s dark history may seem unrelated or even irrelevant to hemp and cannabis cultivation, distribution and consumption at present, remembering the history of slavery in the hemp industry offers a nuanced insight into how African Americans have contributed to the success of a crop that padded the pockets of slaveholders and served as the backbone of an industry which still lives on today.