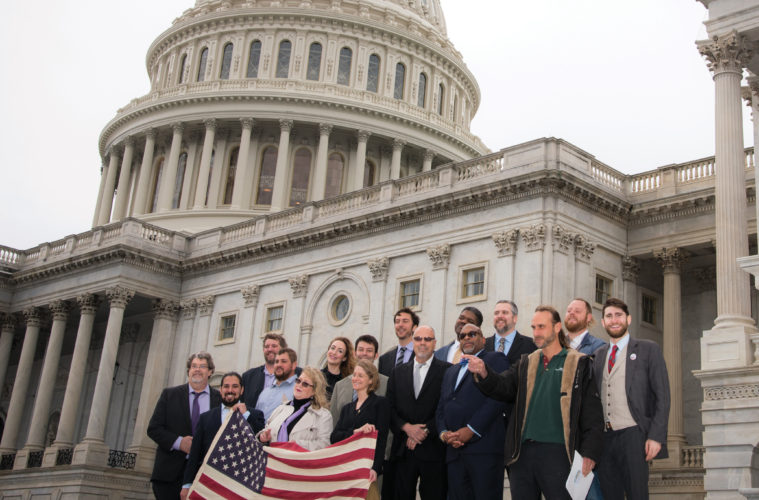 The Hemp Industries Association gathers for Lobby Day in 2017. The author is on the far right. Photo by Ben Droz

Victory for Hemp: A Decade of Hill Advocacy

A federal hemp lobbyist recounts the decade he worked for hemp legalization on Capitol Hill, culminating with the 2018 Farm Bill, and considers what the future could bring.

Originally published in Issue 6 of HEMP. Subscribe HERE or find in a local grocery store.

I first arrived in Washington, D.C. in 2008. President Obama had just been elected, bringing a new wave of electrified idealism, fresh ideas, and the perspective of the nation’s first black president to the White House. The entire city felt different. It was in this wave that I began my working with Vote Hemp, a longtime federal hemp lobbying organization, following the insatiable passion for hemp I had felt for years. I could not have been more excited to get my feet wet and my hands dirty.

For the hemp industry in 2008, the most important piece of federal legislation to follow was the Industrial Hemp Farming Act, a perfectly elegant and concise bill that fit beautifully on a single sheet of hemp paper. Sponsored by Ron Paul, a Republican representative from Texas, and introduced before the Tea Party movement, the bill was like an outcast in an era of increasing party-line gridlock. While a handful of representatives on both sides of the aisle supported the bill, cannabis prohibition still reigned strong, so the legislation had no chance of passage. But that didn’t stop me from dedicating my life to changing this reality.

In 2009, I moved to D.C. to work full time, around the clock, to legalize hemp in America. There had already been a national movement throughout the country, so I had much to talk about with advocates from different states. I walked the halls of the Capitol, going door to door, getting as many meetings as I could, and talking about hemp to anyone that would listen. Congressional staffers were open to quick briefings on the individual hemp movement in their states, despite the ongoing ban on any type of hemp cultivation. Through countless meetings with Congressional staff, the movement grew — slowly. In 2009, we launched Hemp History Week, a nationwide effort to educate and lobby for hemp, and in 2010, it was recognized on the House floor.

On December 20, 2018, President Donald Trump signed federal hemp legalization into law, but guaranteeing the stark sweeps of a presidential signature on hemp legalization certainly did not happen overnight. To the quintessential grassroots movement, this historical moment was the result of decades of activism and advocacy. In order to understand the true importance of this Farm Bill, it is important to understand the history of the modern hemp movement.

Out from Total Prohibition

It all started in 1985, with the first publication of “The Emperor Wears No Clothes” by the legendary Jack Herer. This landmark book wove together the story of cannabis prohibition, while highlighting the incredible history of hemp. It bought to light pieces of the American past that had been buried for decades, and centuries, in the Library of Congress and beyond. With contextualization of modern history, Jack Herer immediately sparked the modern hemp movements.

In 1994, the Hemp Industries Association was formed by a coalition of companies that sold imported hemp products. That same year, Canada began pilot hemp programs, and in 1998, Canada began producing hemp, which became a robust export to the U.S. health food market.

Throughout the next decade, the DEA would continue to deny the opportunity for a legitimate hemp industry in the United States. In a model for legislative activism at the state level, dozens of states would file bills, time and time again, to legalize hemp. Many bills passed, many bills got vetoed, and many resolutions then passed unanimously. This led to a beautiful patchwork of pro-hemp laws in place, without a vehicle to legally grow hemp. Even as the medical marijuana industry took root, hemp was not yet defined.

Even as the medical marijuana industry took root, hemp was not yet defined.

2013 was a watershed year for hemp. The grassroots movement across the country, and hundreds of meetings on Capitol Hill, had created a swell of momentum and the green waves started coming to shore. On Valentine’s Day that year, Sen. Ron Wyden introduced the Senate Hemp Farming Act. This time, he was joined by Senator Majority Leader Mitch McConnell.

Later in the year, when the Farm Bill came up, Colorado’s Rep. Jared Polis (now governor of the state) introduced House Amendment 208. This was the first time hemp had ever received a vote.  It not only passed with a healthy bipartisan margin, but was vastly improved and expanded on behind closed doors by the Majority Leader. The result was SEC 7606 of the 2014 Farm Bill, the now-renowned piece of legislation that allowed states to immediately began moving forward with pilot hemp programs.

With language and precedent under our belts, and support from our emboldened coalition, we looked at new federal actions. Inspired by the “Rohrabacher-Farr Amendment,” an amendment that stopped the federal government from using funding to target state-legal medical marijuana companies, we looked at omnibus appropriations language.

Just days before a vote, law enforcement in Kentucky seized a shipment of viable hempseeds destined for James Comer, then Kentucky Commissioner of Agriculture. Comer sued the DEA to get the hemp, and Congressman Thomas Massie filed an amendment specifically to protect hemp pilot programs. Late that night, two separate hemp amendments passed with overwhelming bipartisan support, directly followed by passage of the “Rohrabacher Amendment,” for the first time since it was first introduced in 2001.

Hemp in Congress had reached entirely new heights, and with it came a shift in advocate understanding of what was possible. We knew we had the votes to legalize hemp farming … and so the question became “how.” We knew that filing our language as an amendment in the Farm Bill was our best bet, and it all came together as well as we could have ever expected.

A Big Push From Cannabis Legalization

The mid-2010s were characterized by a rising tide for hemp, with more and more companies, events, and conferences coming onto the scene every year. Articles about and support for hemp were now a daily occurrence. Hemp went from an extreme niche product sparsely available at food co-ops, into a widely known superfood available across the country, as part of a growing natural foods industry lead by Whole Foods and USDA Organics.

It’s important to remember: 10 years ago, cannabis still carried a harsh taboo, medical marijuana was just beginning, and recreational cannabis wasn’t yet on the table. The knowledge that hemp was different from marijuana was still esoteric. Five years ago, there were major waves across the states that were just beginning to reach Capitol Hill.

While many in the hemp industry are quick to distance themselves from cannabis, it’s clear to me that the cannabis legalization movement further spurred support for hemp.

While many in the hemp industry are quick to distance themselves from cannabis, it’s clear to me that the cannabis legalization movement further spurred support for hemp. Election after election showed lawmakers that support for cannabis was strong. Then, new laws and significant tax revenues pushed cannabis into the mainstream, and with it, evermore education on the plant.

By the time hemp was introduced into the 2018 Farm Bill, it was already well understood to be fundamentally different from marijuana. Meanwhile, marijuana was, and continues, to grow in acceptance as states race to pass stronger laws to create opportunities for consumers and businesses.

A big focus of the hemp industry recently has been on hemp-derived CBD, in part riding on the coattails of marijuana activists bringing the medical value of the CBD compound to the forefront of the converstaion. But hemp is so much more than any singular cannabinoid, and that was always the attitude from the start.

Eric Steenstra, co-founder Vote Hemp and the Hemp Industries Association, always had a much larger vision: to help farmers with a new commodity.

“American farmers are struggling and hungry for new crops that are profitable,” he told me after the signing of the 2018 Farm Bill. “Hemp has already demonstrated that it can be profitable and will be an important new tool for family farmers.”

Hemp legalization is much bigger than the current market can project, and it is part of much larger global shifts in agriculture, sustainability, and domestic manufacturing. I believe that the hemp movement can inspire other changes in countless industries.

This new seed of innovation was planted by American hemp farmers, who have always made up a large part of our culture and economy. Yet family farms have been in crises for decades, and bankruptcies are still on the rise. Even today, over half of U.S. farms are not profitable. By helping the farmers first, hemp can transform our economy, help get us off of subsidized GMO corn and soy, and maybe even make widespread sustainable farming profitable. The supply chain of hemp can now be modernized and commodified.

Jack Herer famously said, “I don’t know if hemp is going to save the world, but it is the only thing that can.” Just in the past few decades since he has said that, we have seen even more mounting crises in our agriculture systems, domestic manufacturing economies, climate, and ecosystems. We still do not know if hemp can save the world. But now, for the first time in the modern era, it has a chance to try.

TELL US, how do you advocate for the hemp plant and hemp farmers?

What Effect Will the Coronavirus Have On the Hemp Industry?

USDA and DEA Delay Rules on Hemp Testing and Disposal 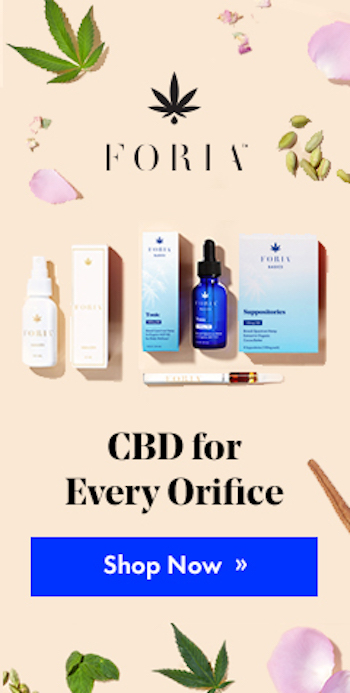 What Effect Will the Coronavirus Have On the Hemp Industry?

USDA and DEA Delay Rules on Hemp Testing and Disposal