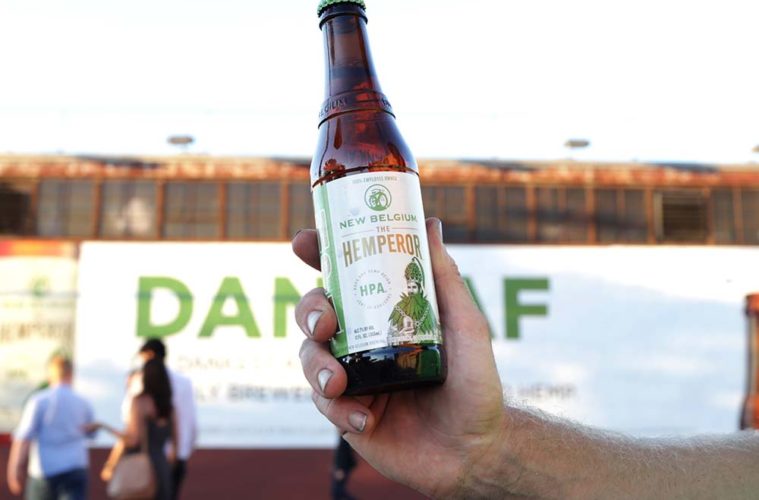 While craft beers incorporating hemp have gained popularity in recent years, there was one state banning the distribution of a popular brewery’s creation. New Belgium Brewing, located in Fort Collins, Colorado, created the Hemperor HPA, an IPA brewed with hemp seeds and hemp hearts. While the beer contains no CBD or THC, when it came time for each state to approve the beer, to the surprise of the New Belgium team, Kansas rejected the beer, banning sales in the state.

“When you formulate a new beer recipe and create a new label, the Alcohol and Tobacco Tax and Trade Bureau ultimately reviews everything and tells you what can and can’t be done,” explains Jesse Claeys, New Belgium Brewing Public Relations Coordinator.

“Most beers are pretty standard with hops, malt, and water, but with something out of the ordinary, such as hemp, they are going to look harder,” he says.

Each state has a similar regularity agency, so in addition to getting the beer approved by the national federal organization, breweries need to get approval from each state they plan to distribute in. For nationally distributed New Belgium, that meant getting approved 50 more times.

While 49 states accepted the beer, it was rejected in early 2018 by the State Kansas Alcoholic Beverage Control, and the New Belgium team was shocked at the decision.

“How many beers have you heard of that have been banned? It added to the mystique and water-cooler worthiness.” – Jesse Claeys

“We were disappointed because we have fans across the country,” Claeys says. He says that besides that, the team was also confused by hemp being considered a schedule 1 drug. “We were using sterilized hemp seed. There were grocery stores selling hemp-based food products, so it didn’t make sense,” Claeys says.

During the ban, Kansas residents would chime in on social media saying they wish they could try the beer. The New Belgium crew used it to their advantage on marketing initiatives and as a platform to reform hemp laws. In fact, the most successful post on social media was one that said Hemperor HPA was banned in Kansas. Claeys says the fact that the beer was banned gave it a unique talked point. “How many beers have you heard of that have been banned?” he asks. “It added to the mystique and water-cooler worthiness.”

But in September 2018, at New Belgium’s request, the beer was resubmitted for reconsideration in the state of Kansas. New Belgium proposed the beer should be allowed citing additional research and changes to the state law.

“We circled back when we had heard that has been activity in the last legislative session,” Claeys says. Once they heard of a modernized view of industrialized hemp products, the team resubmitted the beer, and two to three weeks later it was approved.

Why Kansas Changed Its Tune on the Hemperor IPA

In a letter addressed to the Associate General Counsel of New Belgium Brewing Company, Debbi Beavers, Director of Alcohol Beverage Control for the State of Kansas further explained the situation.

“It appears that the timing of the applications in relation to the current Kansas legal climate regarding hemp and CBD products is what led to the rejection,” Beavers wrote. “Very early in the last legislative session, the Kansas Attorney General released opinion 2018-5, which you cite in your letter. That opinion essentially created a blanket policy that CBD of any kind was illegal in the state of Kansas. It should also be noted that ABC is now fully aware that your product does not contain any form of CBD, thereby making the facts of that Attorney General’s opinion irrelevant.”

Beavers went on to explain that the details and facts of the applications were misinterpreted when deciding to reject them. “Further, even if the presence of CBD was a relevant factor here, current Kansas law would permit your product based on the information you have provided,” she says.

For Zach Cherry of Lukas Wine & Spirits in Overland Park, Kansas, stocking his shelves with The Hemperor was a given once it was allowed throughout the state in late October 2018. “It’s a line extension of a popular brand, with customers asking for it. Pretty much a hole-in-one,” he says.

Cherry says he hasn’t had any customers with resistance to a product containing hemp in the store or heard negative feedback on the beer. “Our location resides in Johnson County on the far eastern side of Kansas, which carries no noticeable stigma towards the product, as it is legal here as long as they follow all the stipulations,” he says.

While Cherry won’t disclose sales figures, he says that sales have been quite good and it has been a successful product so far. “We have had repeat business, no push back whatsoever,” Cherry adds.

Hemperor Sales Strong Across the Nation

This echoes the positive feedback from across the country on the beer. Claeys reports the beer sales for The Hemperor are on track. “It’s performing right at expectations, and we had high expectations,” he says. He attributes the popularity not only to the buzz around the ban, but also because it’s a hop-forward IPA, an extremely popular beer style. He also believes there is appeal with sustainable, new brewing ingredients used.

As for the positive spin on this situation, nearly 2500 people have sent 4500 letters to legislators asking for more support for hemp, according to Brewbound. This is due to New Belgium creating the website, thehemperor.com, where people are able to contact lawmakers in their area. The site also explains the benefits of hemp and the positive impacts it has on our economy and our environment.

For the future of the beer, Claeys says he’s excited for the possibility of using the whole flower of hemp. “We’re proud of the product we have, but we’re excited for the flavor nuances that a new recipe could bring,” he says.