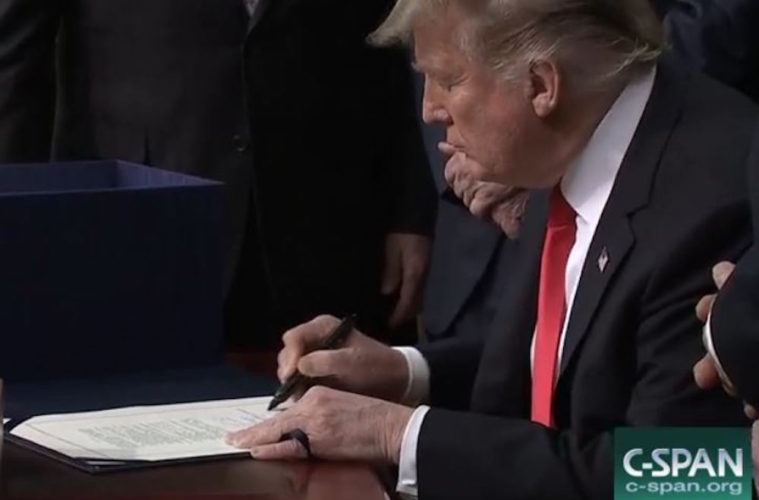 The Industry Reacts to Hemp Legalization

While the Department of Agriculture has yet to release their regulations on hemp, the industry is still excited about the potential of this new legal era.

With the signing of the 2018 Farm Bill by President Trump on Thursday, hemp was legalized and put under the regulatory authority of the U.S. Department of Agriculture. And the hemp industry burst into celebration.

With the freedom to expand beyond research pilot programs, people in many states are eager to explore the economic potential of industrial hemp, according to cannabis attorney Shawn Hauser of Denver.

“Hemp has the potential to be a major new crop, making it a promising new source of jobs and revenue, especially for rural communities,” Hauser said in a statement.

Jasen Russell, the founder and CEO of Hempzoo, a hemp clothing and accessory online retailer in Vista, California, said that the legalization of hemp should spur sustainable economic development across many industries in the United States.

“It’s great, especially for the American farmers in the U.S. because it’s been so long since they’ve been able to do it,” Russell told HEMP. “We haven’t been able to innovate or use the hemp plant in all the ways that it can be used. Especially when it comes to construction, I feel like that’s a really big industry that will benefit and help to build healthy housing.”

Despite the benefits for other industries, Russell does not believe the legalization of hemp in the United States will have much effect on his sector of the business. Unless consumers call for a huge shift toward sustainable fashion, he expects the bulk of hemp fiber production to remain overseas.

“I think a lot more people will be able to innovate with the hemp plant as far as textiles go, but for me it’s probably not going to be a huge change unless people start worrying more about synthetics and the clothing they’re wearing,” Russell said.

Businesses that market products with hemp-derived CBD are applauding the 2018 Farm Bill, which specifically exempts hemp and hemp products with less than 0.3 percent THC from the Controlled Substances Act. Nancy Whiteman, the CEO of cannabis edibles manufacturer Wana Brands, said that hemp legalization can benefit companies like hers, which recently launched a new CBD-only line of gummies.

“The passage of the Farm Bill impacts Wana Brands greatly,” Whiteman said. “Access to quality hemp has been challenging since the industry was not able to legally move it across state lines. Now that the U.S. government has passed the Farm Bill, American Farmers will see economic benefits and American wellness companies will have access to a crop that they can trust to use in their products.”

Lisa Richards is the co-founder of L’eela CBD Body Care, a line of artisan supplements and luxury body care products that feature the wellness benefits of hemp-derived cannabidiol (CBD). She noted that hemp policy reform can also have less-tangible benefits for businesses in the industry.

“The legalization of hemp through the passage of the Farm Bill exponentially expands L’eela’s customer base, removing stigma and creating confidence with consumers,” said Richards. “It also provides us with the reassurance and confidence we have as business owners to move forward and invest, which in turn fuels the U.S. economy.”

Attorney Hauser said that hemp legalization will allow farmers to compete in the growing global hemp economy and called on state and federal governments to focus on creating the regulations for hemp agriculture and manufacturing.

“Hemp cultivation never should have been made illegal,” Hauser said. “The hemp provisions of this year’s farm bill are finally righting a wrong that has prevented our country from competing in the global hemp market for decades. Now that President Trump has signed the legislation into law, it’s time to buckle down and get to work with rule-making. The USDA and state governments should move quickly to develop sensible regulations that will support a robust hemp marketplace while ensuring consumer products meet clear quality and safety standards.”