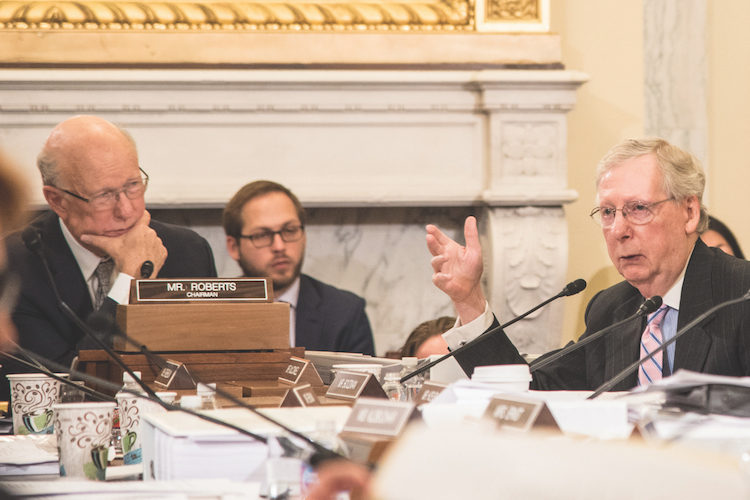 A federal hemp lobbyist recounts the week on Capitol Hill that culminated in Sen. Mitch McConnell successfully adding his hemp legalization bill to the 2018 Farm Bill — and what we can learn from the victory.

Over the course of eight days in June 2018, as the weather turned muggy in Washington, D.C. and hemp farmers around the country tended to their young crop, hemp lobbyists and activists witnessed an unprecedented week of progress on Capitol Hill.

From June 6 to June 13, the hemp legalization cause pushed forward with more momentum than ever before, reaching a climax as Senate Majority Leader Mitch McConnell succeeded in inserting his Hemp Farming Act into the Senate Farm Bill — the passage of which would legalize hemp on the federal level for the first time since World War II.

As a hemp lobbyist, I was working on Capitol Hill throughout the week and witnessed much of the excitement. As I reflect on that mid-June week now, recounting exactly what happened, I believe that week contains important lessons that we can learn to strengthen hemp activism in the future.

It’s midway through the 9th Annual Hemp History Week — an event when activists around the country push for hemp legalization — and there’s a new energy buzzing around hemp. Yesterday, Senators Ron Wyden, McConnell, Rand Paul and Jeff Merkley filed a resolution to officially designate the week as “Hemp History Week.” The resolution won a unanimous vote, as it did in 2017. Unlike last year, however, this unanimous vote was just the first course.

Today, Wyden brought two hemp baskets full of hemp products to the Senate Floor for his now-annual tradition. He spoke about the benefits of hemp for 11 minutes live on CSPAN for all the world to see. Hemp activists also hosted a happy hour on Capitol Hill, inviting hemp leaders and staffers to have a hemp beer and prepare for the week ahead.

It’s Vote Hemp’s Lobby Day, and dozens of farmers and business owners from across the country have flown in to lead over 40 meetings with senators, congress members, and senior staff. Much of the lobbying is behind McConnell’s Hemp Farming Act of 2018, otherwise known as S.2667.

Armed with a freshly passed Hemp History Week resolution, a list of 28 potential Senate cosponsors, and a hot tip from a senator that hemp funding was slated to be in the Farm Bill, we had very productive meetings that day.

As we had been informed, the Senate Agriculture Committee released the base language of the widely anticipated 2018 Farm Bill on the morning of June 8. This massive five-year bill is over 1,000 pages long and includes programs for everything from sugar subsidies to food stamps. During the House proceedings leading up to the 2014 Farm Bill, hemp received its first vote ever and passed with strong bipartisan support. The final version signed into law included the now-famous SEC 7606, which opened the door to all the domestic hemp production that we see today.

When the 2018 Senate Farm Bill was released on Friday, June 8, it included the word “hemp” 48 times in three different sections. With leadership from McConnell, the full language of the Hemp Farming Act of 2018 was included. Senators sent press releases with hemp in the headlines and major publications across the country framed hemp as a major reform in the Farm Bill.

With Hemp History Week events happening nationwide, there was no better time or way to share the fantastic news of the 2018 Farm Bill. There were events at hemp farms, breweries with hemp beer, concerts, and more. This was the largest Hemp History Week to date, with more hemp history to celebrate than ever, while making hemp history.

Far away from Washington, D.C., a delegation from the Hemp Industries Association landed in Europe for a two-week tour that included participation in the 15th annual European Industrial Hemp Association Conference. The EIHA conference brought together over 340 hemp experts from 41 countries to discuss building a legal, global hemp industry, as well as to build support for the “Cologne Declaration on Industrial Hemp,” which calls for “reasonable and harmonized legislation on hemp extracts,” among other things.

Back stateside, hemp activists started the week slow. The Hemp History Week campaign was over, and all lobbyists could do was prepare for the Senate Farm Bill’s upcoming meeting, scheduled for Wednesday morning before the Agriculture Committee.

It’s a political truth universally acknowledged that nothing is as easy as it seems. In the late afternoon, on the day before the Farm Bill was scheduled to be reviewed in committee, lobbyists got news of a new amendment introduced that was attacking CBD. The amendment was filed by a longtime enemy to hemp and cannabis, Senator Chuck Grassley, who is co-chairman of the Senate Drug Caucus and chairman of the powerful Judiciary Committee. Grassley’s amendment sought to define any form of CBD as a type of ‘marihuana.’

The hemp industry took swift action. At 8:34 pm, the first action alert was sent out and people immediately started contacting their representatives and sharing the news. By 10:56 pm, another action alert was sent out by another organization, as social media posts multiplied. Letters from constituents poured into Senate and House email inboxes. With the urgency of a potential vote in less than 12 hours, the adrenaline was flowing across Capitol Hill. 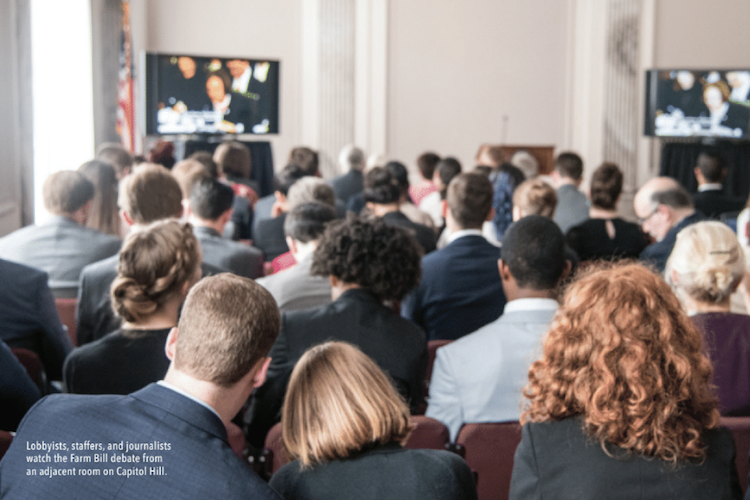 The day dawned a humid 70 degrees and time was of the essence. At 6:00 am, another action alert was sent out to hemp supporters. At 9:30 am, the bill was scheduled to be marked up by the committee and there was a possibility that the Grassley amendment could come to a vote. Not only did the entire industry pour in support, but equally as important, our allies on the Hill did the same.

Before commencing the meeting, McConnell took to the Senate floor to spend more than two-thirds of his time talking about the inclusion of hemp in the Farm Bill and educating fellow senators on the current state of hemp. Had this happened any other time, it would be breaking news. But during our historic week, this was just the kickoff to an historic day.

“Today’s bill would allow any snake oil salesman to market and sell any CBD product as a dietary supplement, or anything else.” – Sen. Chuck Grassley

By 10:00 am, the meeting had begun in the Agriculture Committee room. The room was packed, with the most powerful senators in Congress around a table, journalists in the corner working on laptops, and staffers shuffling around to hand out printed statements and amendments. One of the statements bore the letterhead from the Majority Leader’s Office, with a headline, “McConnell Touts Hemp Farming Act in Senate Farm Bill.” The event was livestreamed for public consumption.

McConnell started by talking about the benefits of hemp, like a true hempster.

The chairman of the committee, Sen. Mike Conaway, replied by stating: “The leader has his amendment, and it will be successful.”

Throughout the meeting, other committee members look for ways to pile on their support and reference the hemp amendment.

“We’ve been waiting for this for almost 20 years,” said Sen. Heidi Heitkamp.

“We are excited for the hemp provision,” said Sen. Amy Klobuchar.

“We provide new economic opportunities in rural America by legalizing hemp, which is an important agricultural commodity,” said Sen. Michael Bennet. “It is a testament to this crop that it is so widely supported in our country.”

However, an hour and 40 minutes into the hearing, a staffer whispered in the ear of the chairman: “I think Senator Grassley wanted to say something.”

Then, Sen. Grassley spoke. “I object to this bill [The Hemp Farming Act] being amended to the Farm Bill on several grounds,” he said. “Procedurally, the bill is way out of order… today’s bill would allow any snake oil salesman to market and sell any CBD product as a dietary supplement, or anything else…. It will put children at risk.”

Grassley asked committee members to work with him on his “Cannabidiol Research Expansion Act,” which would establish a study to see if, and how, CBD should be rescheduled as a drug.

McConnell responded quickly and concisely, and said he and his staff consulted with the Justice Department, the FDA, and the Judiciary committee and had incorporated “a number of their suggestions.” However, he said he would not consider “suggestions that would undercut the essential premise of the bill — mainly, that hemp and its derivatives should be a legal agricultural commodity, just as it was in the U.S. for many, many years.”

When the final bill went to a full committee vote, every member voted in support of the bipartisan bill — except for Grassley, who seemed to oppose the entire Farm Bill because of his longstanding opposition to hemp.

Now, the hemp industry can breathe a huge sigh of relief, celebrate the historic victory — and begin turning their focus to the eventual passage of the 2018 Farm Bill.

Lobbyists have always known about the importance of having powerful politicians sign on to support a cause, and this lesson was only reinforced watching Sen. McConnell push hemp to new heights. But it’s important to remember that Sen. McConnell wouldn’t have come on board without more than a decade of ongoing grassroots activism, which built a strong foundation and network of supporters across more than 40 states.

When the support and strength bubbles to the top, we see how it all pays off. Hemp is now the cream of the crop, and it is important that we continue churning, so we can build a powerful, legal industry.