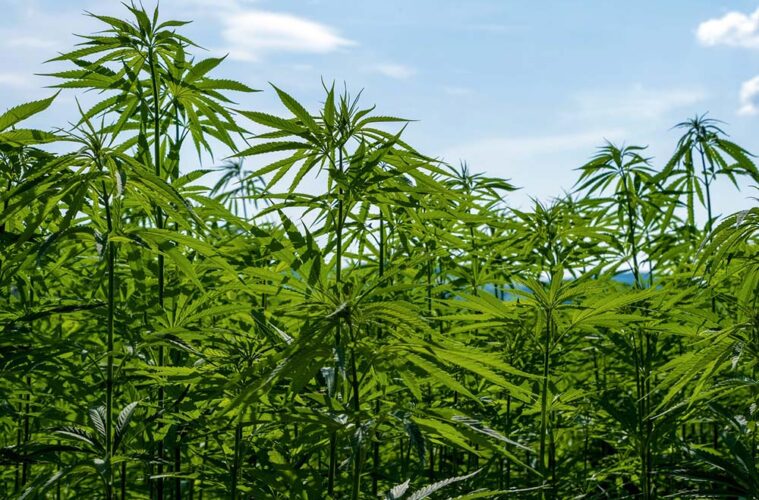 For more on hemp’s first year, keep an eye out for the upcoming print issue of HEMP, on shelves nationwide soon. The issue will contain features from A.J. Herrington, Kit O’Connell, and Joel Hathaway on what the first year of hemp meant for entrepreneurs, consumers, and farmers. Quotes from those articles are previewed here.

On the cold afternoon of December 20, 2018, with nary a mention of the cannabis sativa plant, President Donald Trump signed the 2018 Farm Bill into law. Tucked inside the 807-page spending bill was a crucial amendment that legalized hemp for commercial production in the United States for the first time since World War II.

Exactly one year later, how is the hemp industry faring? It depends on who you ask.

“A lot of people didn’t read the fine print in the legislation,” says Geoff Whaling, chairman of the National Hemp Association.

The fine print in the 2018 Farm Bill included the fact that there was no equity program for the hemp industry. It also included a stipulation that the Food & Drug Administration was going to set the parameters around CBD — and the agency gave little indication it was going to move swiftly to approve widespread applications of the popular cannabinoid. This left the hemp-derived CBD industry in legal limbo for the entirety of hemp’s first legal year. In 2019, the FDA underwent leadership change, resisted calls from Congress to make a determination on CBD, sent out warning letters to CBD companies making health claims, and suggested they’d need more time and money to create CBD regulations.

“I think the numbers we were hearing from the FDA were that it could take between $16 and $20 million dollars to create a regulatory framework,” says Joy Beckerman, president of the Hemp Industries Association and a regulatory officer and industry liaison for Elixinol, a CBD supplement brand.

“There are excellent players putting out high-quality, efficacious [CBD] products in food and beverages, so I don’t want to see those go away,” she says, “but the FDA is skeptical.”

Despite the regulatory struggles, CBD continued its reign in 2019.

If you weren’t working in the hemp industry and you were simply a casual consumer of CBD this year, you might not have noticed anything. Despite the regulatory struggles, CBD continued its reign in 2019. Hemp Industry Daily estimated that hemp-derived CBD sales in 2019 surpassed $1 billion. An August poll from Gallup estimated that 14% of Americans had used CBD-infused products. And anecdotally, CBD was everywhere.

On the farming side, the U.S. Department of Agriculture did a job than the FDA, releasing draft hemp farming guidelines in October.

Before the USDA released its rules, farmers in many states were able to start farming in the spring of 2019 under state laws and the 2014 Farm Bill’s hemp pilot program. And farm hemp they did!

According to Vote Hemp’s 2019 U.S. Hemp Grower License Report, the number of acres licensed to be planted with hemp in the U.S. rose to 511,442 in 2019, more than quadrupling the number of acres licensed in 2018. While Vote Hemp estimates that less than a quarter of those acres will eventually be planted and harvested, it’s clear that hemp cultivation boomed in 2019.

“Last year, we had about 500 growing licenses nationally,” says Eric Steenstra, president of Vote Hemp. “This year, we had over 17,000. A lot of people are growing for the first time this year. There are farmers joining us, obviously, but there are a ton of people getting into this that aren’t even farmers, and there’s a huge learning curve to grow hemp.”

“There are a ton of people getting into this that aren’t even farmers, and there’s a huge learning curve to grow hemp.” — Eric Steenstra

However, many of those farmers were looking to make a quick buck when they decided to grow hemp, and those dreams might not have panned out.

When it came to funding these farming efforts and other hemp businesses, traditional investment channels were mostly closed in hemp’s first year, given that large banks were still worried about running afoul of anti-cannabis, prohibitionist statutes.

Where traditional funding sources such as large banks and government lending organizations came up short, private investors and innovative firms stepped in throughout 2019.

“There’s still some road to travel on the finance side [of hemp],” notes Austin Maness, the chief operating officer of agricultural investment firm Harvest Returns. “There are still some financial institutions that are not quite on board.”

On December 3, the hemp industry got a big break, when federal regulators made an announcement clarifying that banks did not have to treat hemp-related customers with any additional suspicion. It was a big sign that the hemp industry is on the path to maturation, and that 2020 could be a watershed year for the plant.

LET US KNOW: Do you think legalization has been good for the hemp industry?