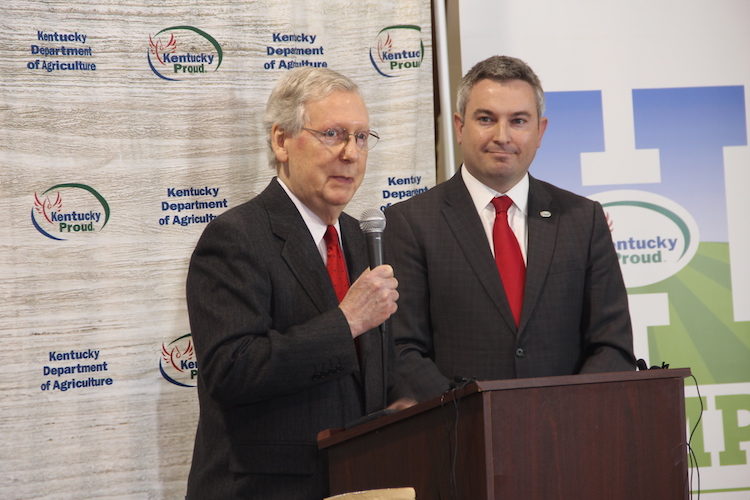 The U.S. Senator, who currently serves as majority leader, is the most high profile lawmaker yet to announce concrete steps toward federal hemp legalization.

Senate Majority Leader Mitch McConnell (R-KY) announced today that he plans to introduce legislation that would legalize industrial hemp at the federal level. Sen. McConnell made the announcement at a press conference with state Commissioner of Agriculture Ryan Quarles in Frankfort, Kentucky.

Under his proposed Hemp Farming Act of 2018, the crop would be classified as an agricultural commodity and removed from the list of controlled substances. Regulation would then be accomplished at the state level.

Sen. McConnell was instrumental in adding hemp agriculture pilot programs to the 2014 Farm Bill. The senator said he is looking forward to a return of hemp to Kentucky fields.

“Hemp has played a foundational role in Kentucky’s agricultural heritage, and I believe that it can be an important part of our future,” he said in a press release.

“Here in Kentucky, we have built the best Industrial Hemp Research Pilot Program in the country and have established a model for how other states can do the same with buy-in from growers, processors, and law enforcement,” he added.

Commissioner Quarles said that the federal legislation will allow states to realize the economic potential of industrial hemp, noting that growth in the sector is hampered by federal regulations.

“I want to thank McConnell for introducing this legislation which allows us to harness the economic viability of this crop and presents the best opportunity to put hemp on a path to commercialization,” he said.

Sen. McConnell plans to introduce the Hemp Farming Act of 2018 when the Senate returns to session next week. The bill will be co-sponsored by a bipartisan group of lawmakers including Republican Rand Paul, the junior senator from Kentucky.

“While this has been, and will continue to be, a broadly bipartisan effort in Congress, when the history of hemp legalization is written, the two most important figures will be Mitch McConnell and James Comer,” said Roundtable General Counsel Jonathan Miller, who previously served as Kentucky’s State Treasurer and Chair of the Kentucky Democratic Party, in an email.

“Everyone who is working so hard to build this nascent industry understands that we owe deep appreciation to Senator McConnell for his strong commitment and steady leadership on this issue,” Miller said.

HEMP will continue to cover McConnell’s efforts to legalize hemp as the legislation progresses.