In Oregon, a Marijuana Exodus Creates a Hemp Renaissance

Many of Oregon’s cannabis farmers are switching to hemp. They have plenty of reasons why.

When Trey Willison — a hemp farmer in Eugene, Oregon — first told his corn-farming father about the profits he was making on his hemp farm, his father didn’t believe him. Willison’s father only makes $600 an acre on his corn farm, so he thought Willison’s hemp math must be wrong.

“The hardest part in convincing other farmers to get into hemp is getting them to believe how much money they can make from it,” says Willison, who now owns a hemp and cannabis breeding company called Eugenius.

Willison exclusively bred cannabis for 15 years. But recently, he switched his focus to hemp and breeding for “the minor cannabinoids like CBD, CBG, CBDv, and THCv.” Willison says his transition was inspired by the shocking price drops in the cannabis market.

“The price of marijuana has tanked in Oregon,” he says. “I never thought it would get so low.”

Unlike what Willison’s father thinks, the math is simple — and it’s impacting cannabis farmers across Oregon: A pound of quality cannabis in Oregon now sells for about $500 a pound, when just last summer, that same pound was selling for $1,500.

The result is also simple: A significant number of Oregon’s cannabis farmers are switching to hemp alongside Willison. Farmers interested in producing CBD are sticking with hemp and forgoing the cannabis game altogether. Earlier this year, the Associated Press reported that applications to cultivate hemp in Oregon “have increased more than twentyfold since 2015, making Oregon no. 2 behind Colorado.”

Oregon’s cannabis regulations have both precipitated and encouraged this trend. Cannabis licenses from the Oregon Liquor Control Commission (OLCC) are more expensive than hemp licenses from the Oregon Department of Agriculture (ODA). The cheapest cannabis license is $1,250 (including the application fee) and can get as expensive as $6,000, compared to the hemp certification, which is just $1,300. The hemp license also allows unlimited acreage, whereas the largest cannabis grow license limits farmers to less than an acre. 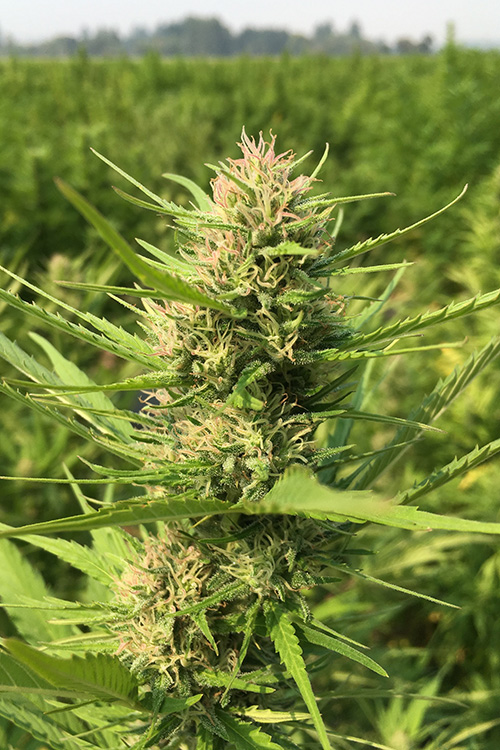 Consequently, farmers “can make more than $100,000 an acre growing hemp” thanks to the high demand and low supply of quality CBD-rich medicine on the market, according to the Associated Press.

HEMP spoke to five Oregon hemp farmers, including Willison, to better understand the cannabis exodus and hemp resurgence. Four of these farmers are now fully in the hemp market, and one still has a cannabis farm. While all five of the farmers recognize the fiscal benefits of choosing hemp over cannabis, they all say they were motivated to start farming hemp for more personal reasons.

Their collective experiences provide an eye-opening look at things to come for states just starting to legalize marijuana and hemp, as regulators and farmers are forced to grapple with these newly-legal economies.

Switching from Cannabis to Hemp

Cannabis has always been a part of Matt Brown’s life. He’s been cultivating it for the past 13 years, both in California and Oregon. He never anticipated he would become a hemp farmer and admits he “used to have the same stigma as everyone else about hemp, that it was a bunch of males grown on top of each other for textiles.”

After moving to Southern Oregon, he learned that “there was more to the hemp industry than t-shirts and hats.

When Brown’s father was diagnosed with throat cancer and given just 90 days to live, he immediately began chemotherapy, using cannabis tinctures, and a low dose of Rick Simpson Oil (RSO), both very high in CBD. Brown says thanks to in part to CBD, his father is still alive today.

While Brown’s interest in CBD was piqued by his father’s experience, he says his decision to become a hemp farmer was ultimately because of his daughter. “She can walk through my hemp fields, but that could never happen with cannabis because there is such a stigma around it,” he says. 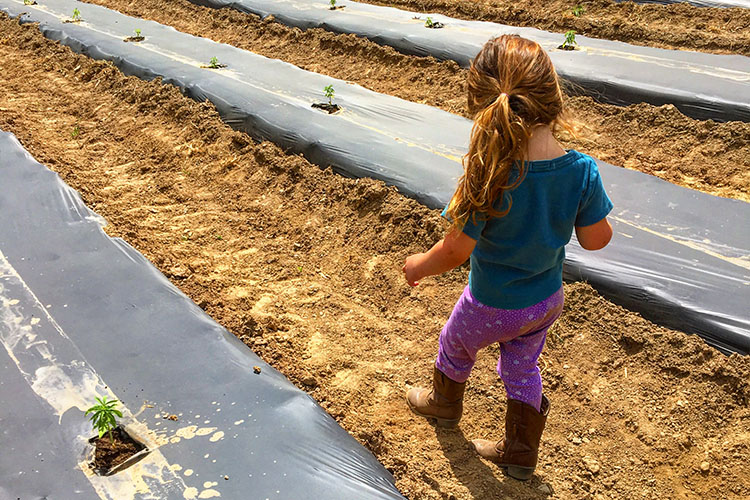 Hemp farmer Matt Brown says one reason he switched form cannabis to hemp is so his daughter (above) can walk through his fields. (Photo via Matt Brown)

Brown’s story is similar to many other hemp farmers in Oregon, including David Tracy, who is now the owner of a small-scale organic hemp farm named Dreamland.

When Tracy first began growing cannabis, he never dreamed he would end up growing hemp. Born in Massachusetts, he wanted to start a cannabis business there, but “it was way too expensive,” so he went out west to Oregon.

“While it legally is hemp, what we are breeding is effectively cannabis.” – David Tracy, Dreamland Organics

He originally intended to open a dispensary, but that changed when he got to Oregon. Tracy met a landowner interested in starting a hemp farm and another partner who already had a dispensary, which was the impetus for him starting Dreamland Organics. 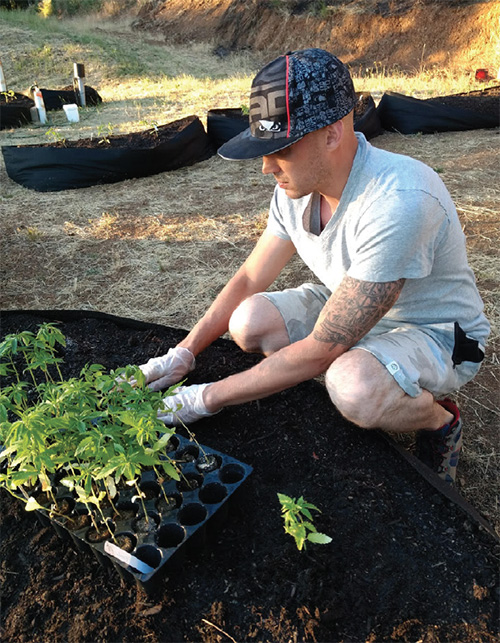 Today, Dreamland has “only an acre of land to work with.” Tracy says they “can’t compete with the guys doing massive acres of hemp,” so their goal is “to be the craft cannabis of hemp.” He says he is interested in scaling up his business, but only wants “to scale up as much as I can find people who share my vision and philosophy of creating quality medicine.”

According to Tracy, Dreamland decided to go for a hemp license rather than a cannabis license because the “hemp license took two weeks to get from the ODA instead of nine months from the OLCC.” But he stresses that there is a difference in his product. “While it legally is hemp, what we are breeding is effectively cannabis,” Tracy says. “And it grows and smells like it.”

CBD Breeding in the Hemp-Only World

Some Oregon farmers switched from cannabis to hemp not because of the falling marijuana prices, but because the simpler hemp regulations make it easier to experiment with breeding for cannabinoids besides THC.

When Seth Crawford started breeding cannabis with his brother Eric 15 years ago, he says he “didn’t even know what hemp was” and “generally had no idea what strains we were growing.” Then, 2014 changed everything. Crawford went from teaching Oregon State University’s first class on cannabis politics to helping the university get involved in industrial hemp research. 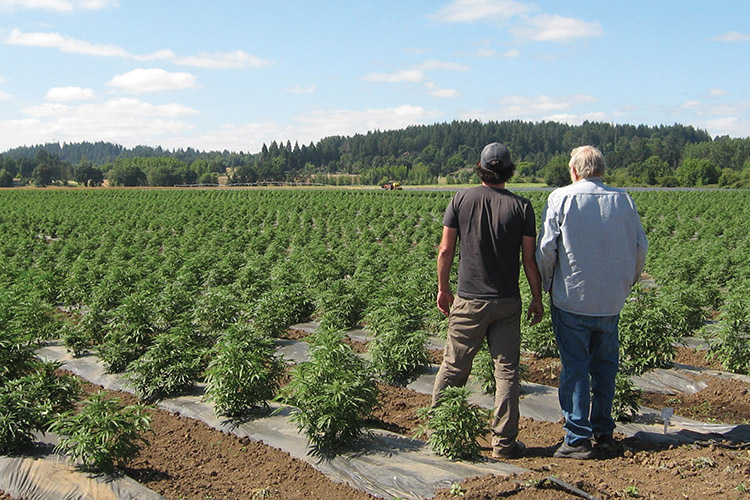 Seth Crawford and his father Bruce survey their fields of hemp, growing in the Oregon summer sun. (Photo via Seth Crawford)

“The Federal Farm Bill was passed in 2014, and that was also when CBD was really taking off, so [my brother and I] began looking into the hemp CBD market,” says Crawford. Through his research, he says he knew there were “some varieties we had developed for the medical cannabis market [that could] pass the standards of industrial hemp.” And he was right.

He and his brother’s company, Oregon CBD, has expanded rapidly since then. Originally, they grew three acres of hemp, but soon scaled up to a 60-acre farm. They realized there was no way they could plant clones on that scale, so they began growing from seeds. Many other farmers were scaling up at the same time and had the same problem. However, because of their early work developing CBD seed genetics, Oregon CBD was capable of filling this need, which turned them into “the largest seed company in Oregon.”

Best of Both Worlds

Of course, nobody even has to choose between hemp and marijuana — and many cannabis breeders are finding it’s best to have permits for both industries when experimenting with cannabinoids.

Willison, who breeds both cannabis and hemp at Eugenius, has been able to experiment widely while occupying both industries. He has bred strains with elevated levels of unknown cannabinoids, such as one “with 0.4% of an unidentified cannabinoid that is chemically similar to oxycodone.” Another interesting phenomenon he has encountered in his breeding is “a lot of CBD-rich strains have a high level of Delta-8-THC and myrcene.”

Outside of Cave Junction, Oregon sits East Fork Cultivars, a marijuana and hemp outfit that keeps the two farms running concurrently, which also allows them to experiment with high-CBD, low-THC strain development.

East Fork has a modest-sized, two-acre organic farm, with only a bit over an acre planted for hemp, as well as a separate outdoor cannabis plot where they do all of their breeding. To transfer their genetics from their marijuana farm to their hemp farm, East Fork sells their seeds or clones to a dispensary then buys them back. 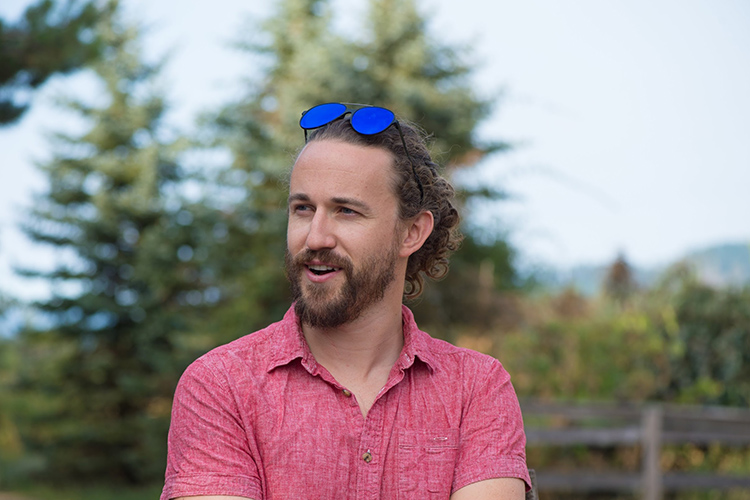 Mason Walker, the CEO of East Fork, says that their breeding setup is ideal. “If we develop THC-rich cultivars, they can stay in the OLCC system,” Walker says. “Or, if they end up being CBD-rich, we can bring them into the ODA market.”

Walker says he doesn’t see too much difference between his cannabis and hemp cultivations, plants that he feels “are becoming increasingly the same.”

Will the Hemp Bubble Burst, Too?

If the marijuana industry in Oregon has suffered from glut pricing, it’s likely that the hemp industry will experience the same phenomenon in the next few years, as more farmers switch to hemp and supply increases.

And hemp farmers also have to worry about international competition — more than their marijuana counterparts, still stymied by international drug regulations. “Once China gets involved, the price will bottom out,” says Trey Willison. “Hemp will only be marginally profitable as more countries get involved.”

If Willison’s predictions are true, then all of the farmers who rushed into the hemp market will be in the same predicament their cannabis-growing neighbors have already experienced.

But Willison is still optimistic — much like his hemp farming peers in Oregon — and enjoying the harvests as they come.

“Everything has its season,” he says. “Within a couple of years, [current CBD prices] will be gone and people will diversify into seeds, fiber, or other uses.”

Walker of East Fork Cultivars says that he enjoys growing hemp compared to marijuana, regardless of the price.

“I like to say we grow our cannabis inside of a medium security prison — with 8-foot-high fences, security cameras, and steel doors around our vault, all mandated by the state,” says Walker. “With hemp, we can be farmers again.”