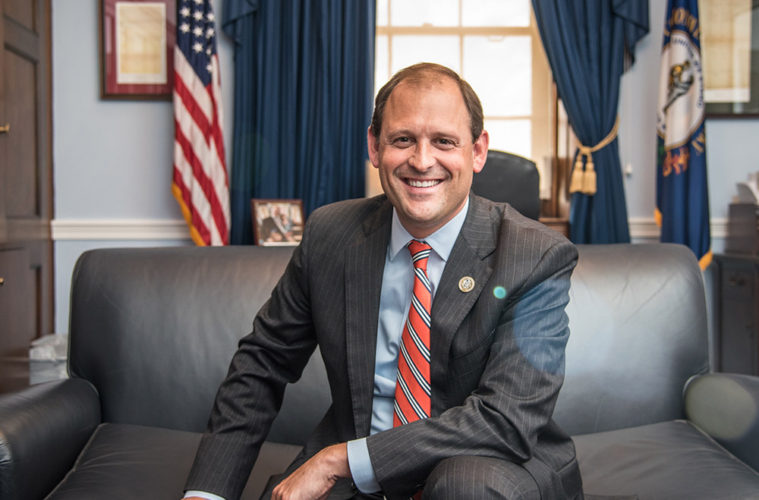 Originally published in Issue 5 of HEMP. Subscribe HERE or find in a local grocery store.

When it comes to advocating for federal hemp legalization, Kentucky’s politicians have led the way. Over the past few years, the Kentucky delegation has been unmatched on Capitol Hill when it comes to spreading the word about the plant and its potential. Senate Majority Leader Mitch McConnell gets most of the media attention, but a few Kentucky representatives in the House have also been working for years to reform the federal government’s hemp laws.

One such hemp champion is Congressman Andy Barr, a Republican from Kentucky’s 6thDistrict. Barr spoke on the House floor back in 2013 in support of the hemp amendment in the Farm Bill that has allowed farmers to grow hemp in Kentucky; he also co-sponsored the Industrial Hemp Banking Act, HR-4711, which would protect hemp farmers by making sure they can have access to the banking system.

On a muggy summer day, Barr sat down with HEMP’s contributing editor Ben Droz in his congressional office to discuss the importance of a separate hemp banking bill, the legacy of hemp in Kentucky, and the meaning behind the current momentum for hemp in Washington, D.C.

HEMP: How did you first get involved in hemp and what it’s been like working and learning about hemp over the years and seeing it develop?

Andy Barr: As a congressman from central Kentucky, you have to go back in history a little bit and look at the history of the land and the people where I come from. The district that I represent is the congressional district that was represented by Henry Clay, also known as The Great Compromiser. Speaker of the House, he was a U.S. Senator, and also the Secretary of State in the John Quincy Adams administration. What a lot of people maybe don’t know about Henry Clay is that he was a hemp farmer. In the early 19th century, mid-19th century, all the way through the early 20th century, central Kentucky was one of the nation’s top producing regions for hemp.

There’s a good reason for that. Along with burley tobacco, the blue grass, and the limestone water that comes from our area — which is the life of our bourbon distilling heritage — our region is perfect for the production and the cultivation of cannabis. That’s why this holds so much potential. Not just from a perspective of the past, but also for the future.

HEMP: NORML, a pro-marijuana non-profit organization, hasn’t given you the best grade on voting for other kinds of marijuana-related amendments. Where do you draw the line between hemp and other types of cannabis?

Andy Barr:Well, of course, the definitions will vary, but in general, hemp is low-THC cannabis. It does not have some of the psychoactive effects of the higher-THC cannabis that is marijuana. Of course, we’ve seen some very positive benefits of cannabis with respect to some pharmaceutical applications, particularly in seizures and epilepsy. I think there is definitely room to explore pharmaceutical applications for different varieties of cannabis. There’s also, however, some applications for nutraceuticals, for textiles, for clothing manufacturing, for auto manufacturing, and other uses. We do have a difficult situation in Kentucky right now with respect to an opioid addiction epidemic and so law enforcement continues to weigh in on recreational marijuana in opposition to that, but nevertheless, I think it’s important to not conflate the two debates.

HEMP: You represent the heart of hemp country and you’ve got some constituents growing hemp. What does it mean to them?

Andy Barr:Well, of course, my area was known, not just for bourbon and horses, it was known for many, many years as the capital of burley tobacco. Well, as smoking cessation programs have gone into place, as demand for tobacco has declined, both globally and domestically, many of our burley producers are looking for ways to diversify their agriculture operations. Of course, industrial hemp is a natural way in which tobacco farmers can look to other types of products, other types of commodities to continue their farming.

HEMP: We’re really excited about the Industrial Hemp Banking Act. What needs to happen for that bill to gain traction, or will we need it at all if hemp becomes federally legal?

Andy Barr: Well, I think we will still need it. It may be belts and suspenders, of course.

I’m a co-sponsor of the Industrial Hemp Farming Act of 2017, introduced in the House by Congressman Comer, our former agricultural commissioner in Kentucky who was a champion of our pilot program in Kentucky. We do need to de-schedule industrial hemp, low-THC cannabis, because, again, it doesn’t represent the kind of drugs that are also represented on the Controlled Substances Act list. So, I believe we need the Industrial Hemp Farming Act to provide legal clarity for industrial hemp — for Kentucky and for other states, for pilot programs, for research, and for further commercialization of industrial hemp.

But I also believe we need the Industrial Hemp Banking Act, the bill that I introduced as a member of the House Financial Services Committee. What we’re doing with this bill is we’re making sure we have some legal clarity and a legal safe harbor for banks, credit unions, and lenders, including the farm credit agencies that are regulated by the Farm Credit Administration. We need to say to the regulators, the banking regulators, the Farm Credit Administration, and the credit union administration that lending for legal hemp businesses should not be subject to any excessive scrutiny. We certainly do not want to choke off access to banking services or financial services for these businesses that are operating legally, producing a legal crop, and conducting a legal business. Unfortunately, some of these bank regulators and financial regulators conflate legal hemp with illicit marijuana.

I know some states are experimenting with different laws with respect to marijuana, but at least with respect to industrial hemp, you have a nationwide, federally authorized program for industrial hemp, and therefore, federal banking regulators and the federal Farm Credit Administration should be explicitly directed to allow for banks, credit unions, and other lenders to offer credit for these hemp businesses.

HEMP: Absolutely. What does it feel like to be a hemp supporter on Capitol Hill today, now that there is so much momentum?

Andy Barr: It’s really exciting. I mean, I think it’s an educational process on both sides of the aisle. I think many law-and-order-oriented members of Congress have had pause, have wanted to learn more about this, or have been a little skeptical, because of the natural connection to other kinds of cannabis plants, which are illegal in some states. So, there’s an education process to explain to members who are strongly opposed to legalization of marijuana, that hey, you can hold that position, but you don’t have to hold a position that all cannabis should be illegal.

Frankly, other Americans are surprised to learn the amazing potential of hemp and all the different uses and applications for hemp. You know, just right down the road from many of the hemp farms in Kentucky is the Toyota Motor manufacturing plant, the largest auto manufacturing facility in the world for Toyota. They produce a lot of cars, and guess what? In cars, there is a lot of need for manufacturing materials for the interiors of those vehicles. Hemp turns out to be a terrific potential use for interiors of vehicles.

So, the opportunities for industrial hemp are significant. Of course, CBD is where a lot of profit center is right now, but there are other uses as well. In fact, one of the reasons I think Congressman Jim Himes from Connecticut is joining with me is that in Connecticut is a lot of high fashion and apparel manufacturing. I think folks up in that area recognize the potential in fashion and in clothing design to use hemp as a textile.

Hemp has so much potential, not just to improve the lives of every day Americans, but to provide jobs and economic activity as well for many. I’m looking forward to continuing our advocacy, both on the banking act and to permanently legalize industrial hemp.